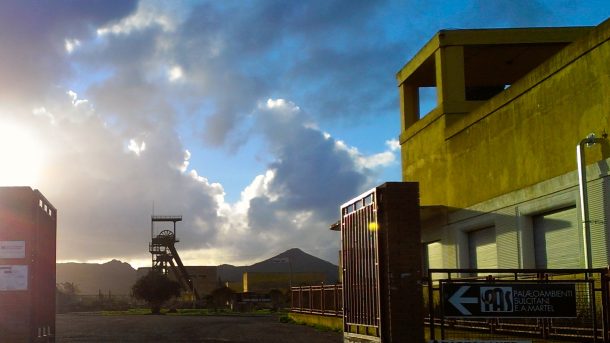 Now
The Summer School venue is the Sotacarbo Research Centre located in Carbonia in the former Grande Miniera di Serbariu. In 1991 the Municipality of Carbonia bought the whole area of the ex-great mine of Serbariu to start its rejuvenation as part of an industrial archaeology operation that aims to show the historical pathway of the mining industry in Sulcis. In 1936 the “Società Mineraria Carbonifera Sarda” carried out some surveys in the Sulcis coal basin to the south of the mine of Sirai, active since 1918. Here, in an area called Serbariu, a great coal basin which extended for about 22 hectares was detected, where in 1937, the “Carbonifera Sarda” began the construction of a new mine. This site was destined to be the nucleus around which the city of Carbonia was to be founded.

During the Second World War, the mine of Serbariu underwent a deep upgrade and the production level quickly reached four million tons. A huge amount in those days. Five kilometers of galleries were dug, served by modern ventilation systems and by two extraction wells, the mine was also equipped with a modern washery, a big power plant and connected by an efficient railway with Sant’Antioco and to the rest of Sulcis-Iglesiente.

Despite the huge upgrade, some tragedies did occur, like on February the 14th 1937, when uncontrolled water flow in the deepest levels of the mine caused the deaths of five miners.
The production continued to grow and between 1940 e 1946 the number of workers increased from 3000 to 11000. The only case in Italy where production reached the peak level during the Second World War.

The post-war reconstruction corresponded for the mine of Serbariu with the beginning of the decline. The birth of the industrial centre of Portovesme at the end of the 50s and the high cost of producing coal led to the closure of the mine in 1971. After a few years the “Ferrovie del Sulcis” were closed too, not by coincidence.